Ever want to compare who is following and who is not? 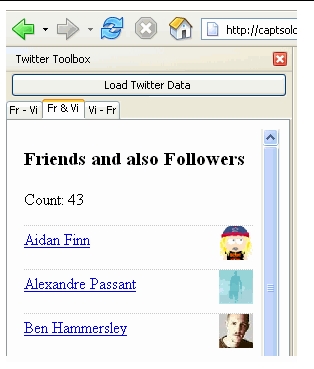 A nifty Firefox (and Flock) plugin that adds a sidebar with three tabs.

Install Twitter Toolbox and compare the following and followed.

::Update:: This tool has not been updated for Firefox 3. ::Update::

Here are two alternative web solutions for comparing Twitter followers and following that are awesome. Listed in order of preference.

Twitter Karma has a nice interface that lets you see who you are following, who is following you and the combination of both. It will also show you Friends in the same way. Easy to understand.

My Tweeple takes it a step further and also allows you to ding Twitter accounts that you feel are spammers. It keeps a vote count allowing you to use this information in deciding to follow someone or not. My friend Shannon wrote this and he is open to suggestions for more features. The guy has talent.

3 thoughts on “Twitter – Compare Followers, Friends Following and Not”