Despite a waiting line stretching to the end of the block 30 minutes after opening, enjoying the Engadget Live Boston event wasn’t delayed significantly because the lined moved along quickly. 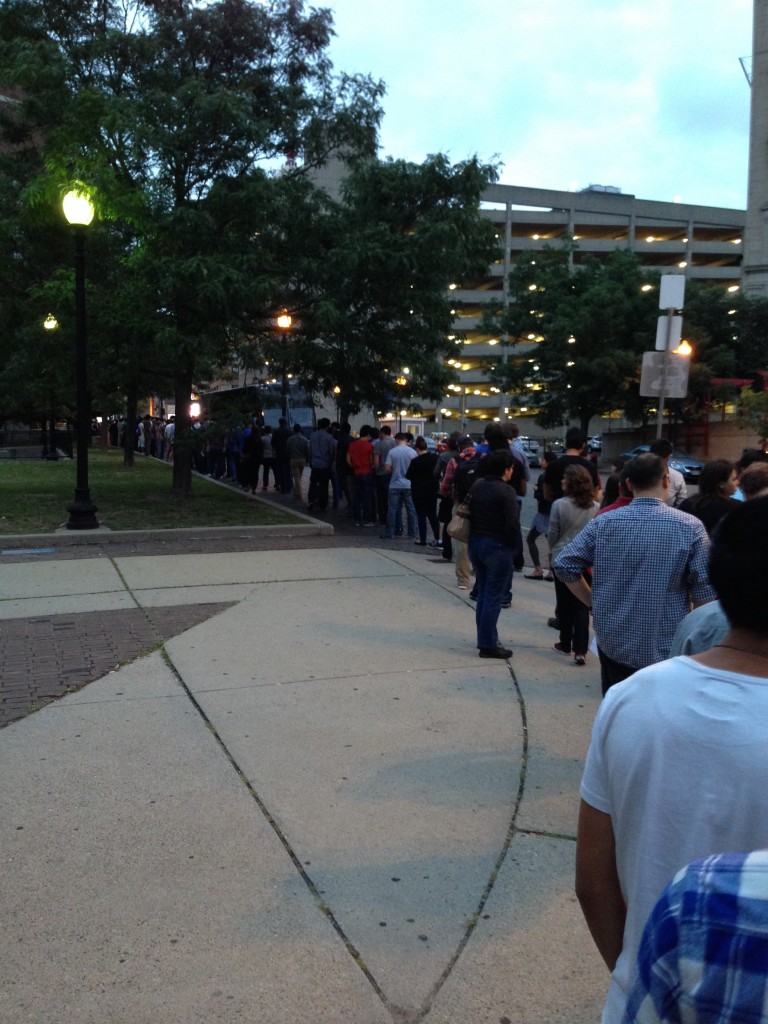 Inside at the Royale were about 17 presenters ranging from “really cool”, to “why would anyone use that”? 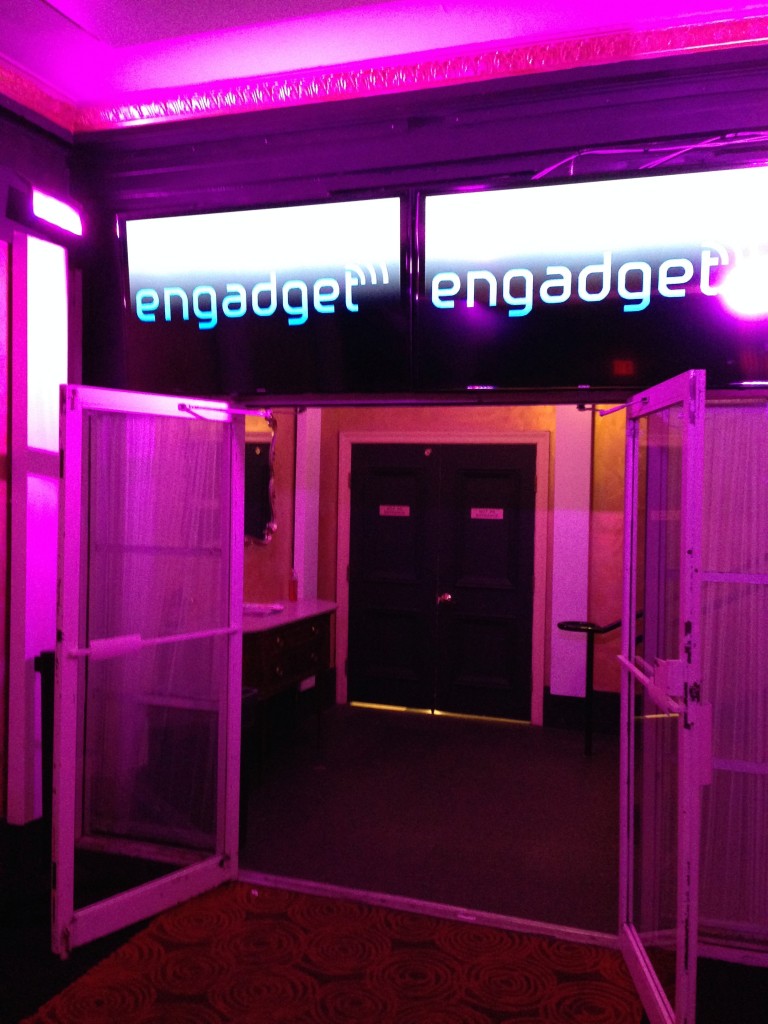 There was one item that I may actually purchase, it was LinkMount. This KickStarter project allows you to adhere a mount to your phone. To this mount you can attach a tripod, a leash, a magnetic mount or use the built in stand.

In the photo below you can see a strip of red 3M adhesives. These are how the mount attaches to your phone. Removal, via sliding dental floss under the mount removes cleanly and leaves no residue. 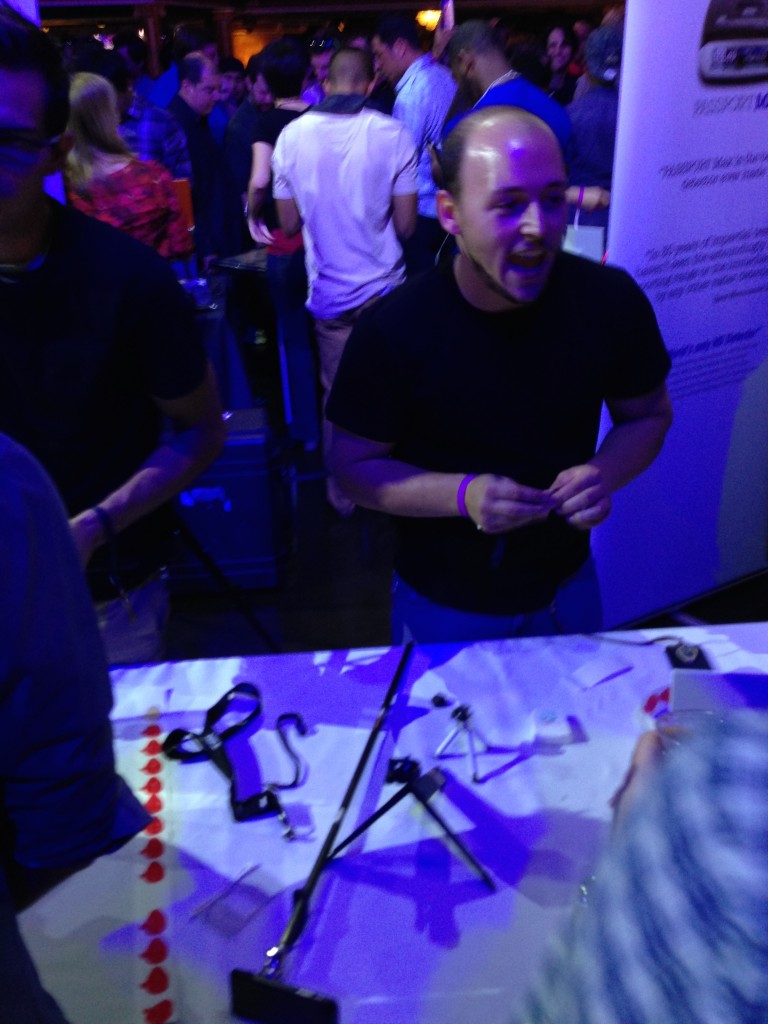 The complete system is available on KickStarter and ships in December, 2014.

I have to say that FormLabs also really impressed me with their $3,300 desktop 3D professional printer.

I was shown a 3D piece of plastic that was polished and said to be of optical quality. 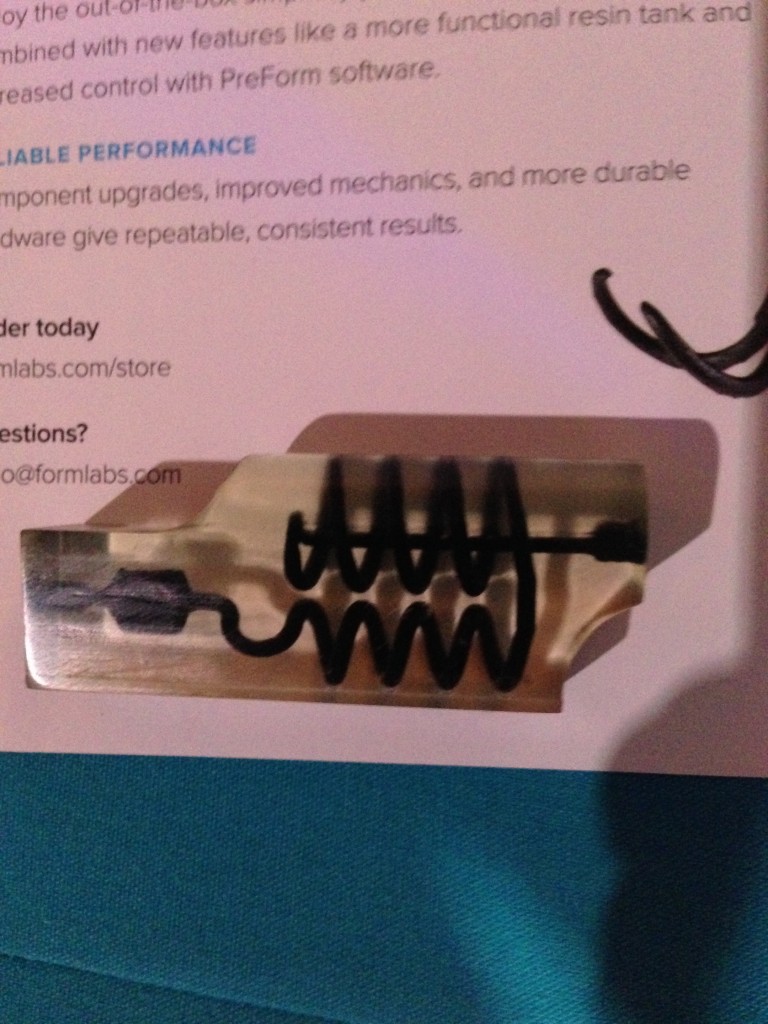 The printer is compact and works quickly. 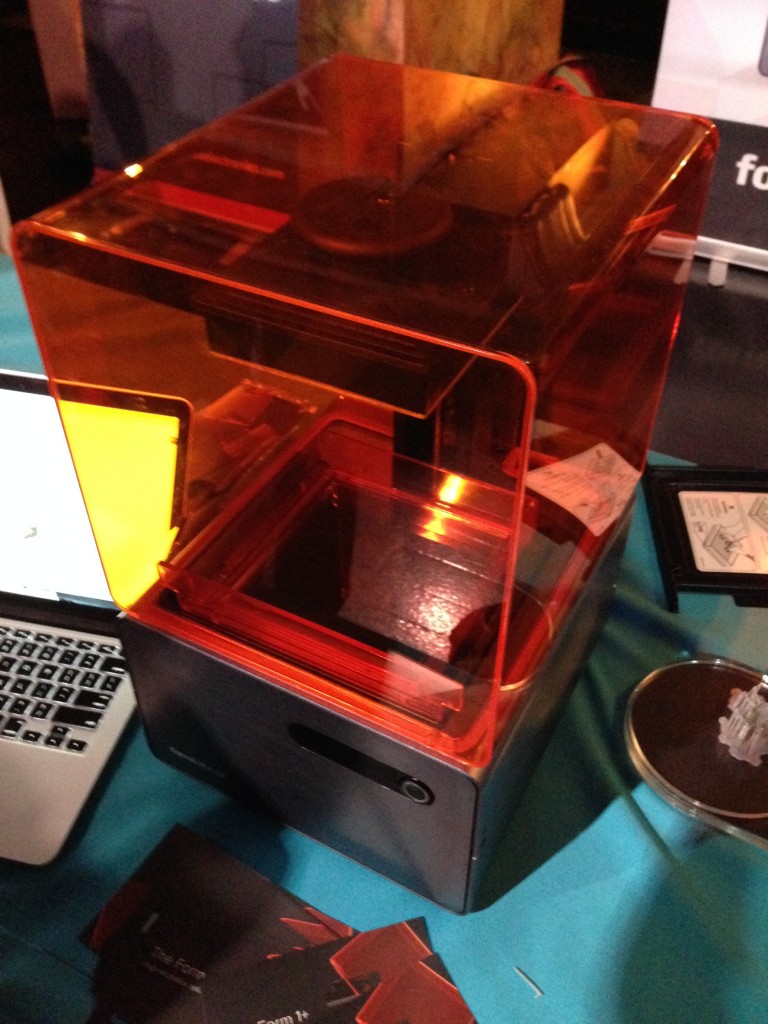 This detailed shell can be printed in a couple of hours. 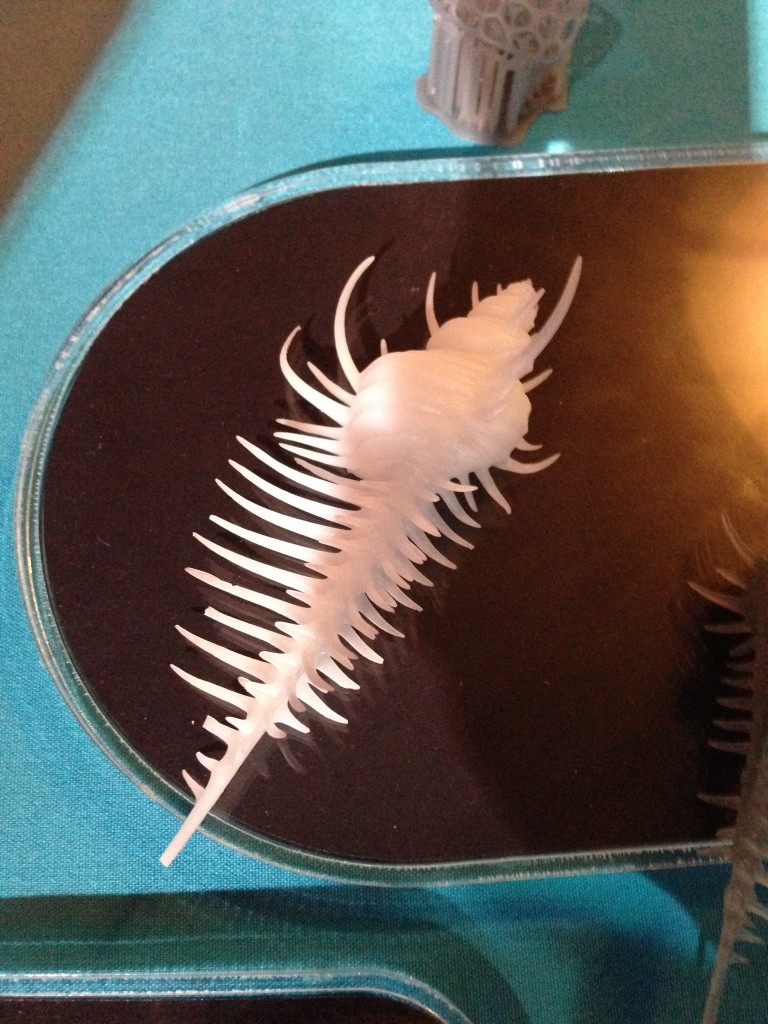 Beyond this I saw GoGLove which allows the wearer to control a phone simply using gestures. No wires. But, I am not a glove kind of guy.

The robots, yes. There was my favorite, VersaBall from Empire Robotics. 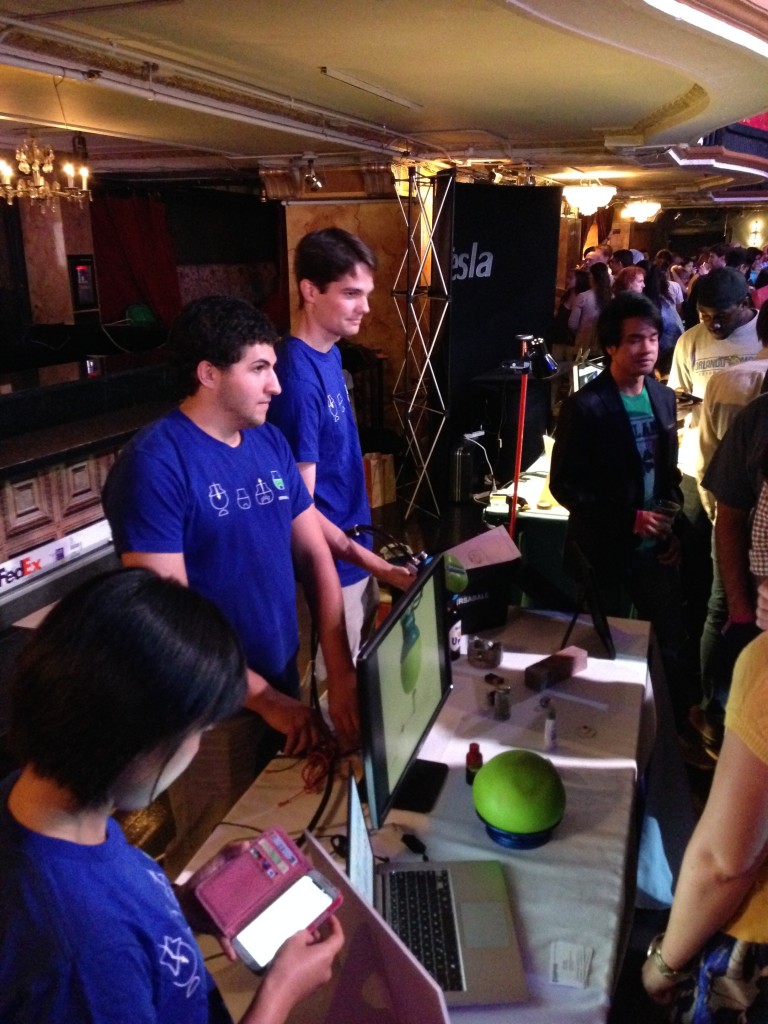 The green ball is essentially a balloon with “sand” inside. When suction is applied the ball forms around the object, and without crushing it, can lift and move the object, until the vacuum is released.

These VersaBalls would be at the end of a robotic arm. The smaller ball picked up all of the small items on the table, one of which is a typical salt shaker.

I had a lovely chat with the woman in the lower left of the photo. She highly recommended the Maker Fair in New York.

I asked her what was inside the green balloon. “I can’t tell you” was the reply. She did explain that smooth round contents did not grip well. They found that sharp angular contents would interlock into place and hold position more effectively after the vacuum was applied. I learned that sand and coffee were tested.

I saw a military looking robot with tank track like treads and an arm.  An attendee was intent on letting the robot hold her drink and driving away with it, which it did. 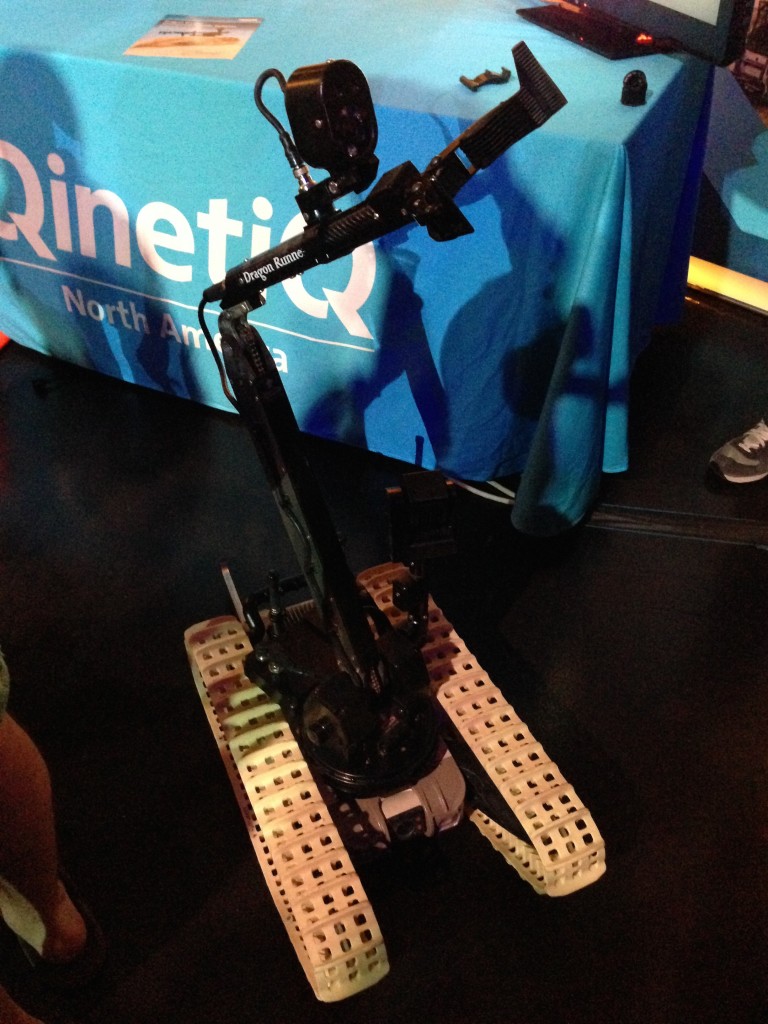 There was another robot kit, full of the pieces to make your own robot. That looked pretty cool.

There were a lot of really cool looking inventions, some even already on the store shelves that did not make sense to me.

The makers of the Boogie Board have my complete support and I am impressed that their product is on the shelves around the country. However, I don’t see the need for a $29 electronic notepad that will hold my message “forever” or until it is erased by the press of a button. 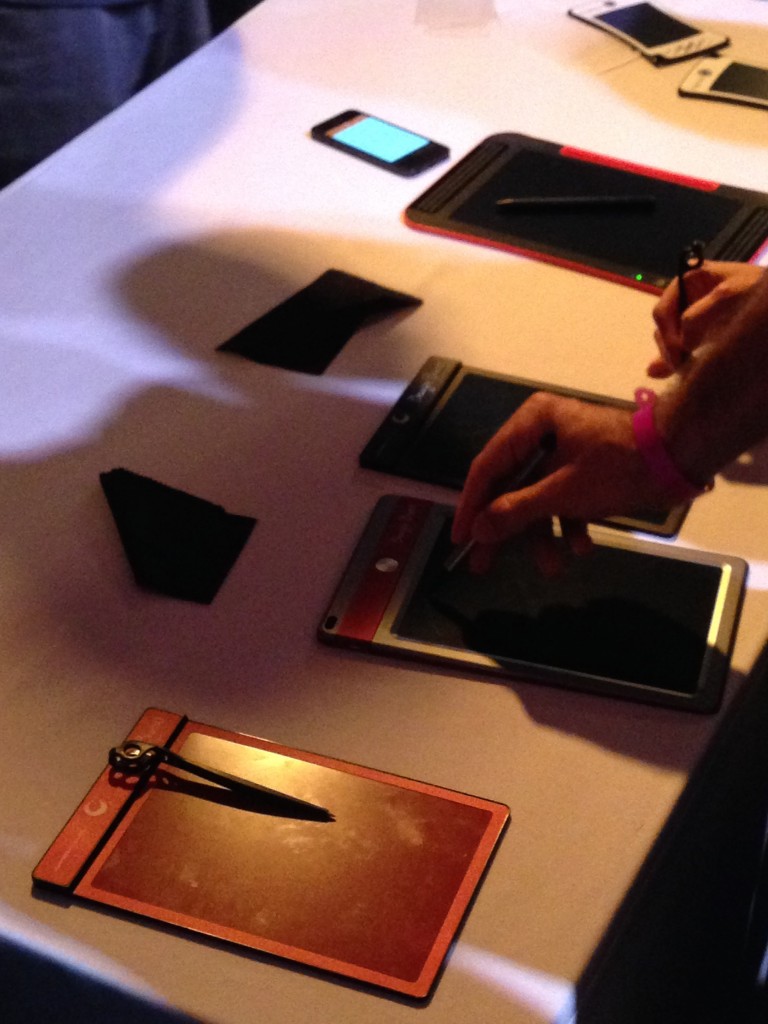 The Boogie Board electronic note pad

At $29 it is essentially a single sheet and does not sync. For $99 you can sync to your phone or output a PDF and other file formats. Generally, a piece paper meets my needs just fine.

Vaporized alcohol, radar/laser detectors to avoid speeding tickets and the various gaming offerings were not for me.

It was great to see a peek into the future and as Wayne Kurzman said the trend toward disintermediation and creating things locally, even at home.

I saw the blurring of the virtual and reality mostly in the gaming area. As well as the advances in gaming.

We are gaining more control (3D printing) while letting go of control (robots) at the same time. The future holds many choices. I hope that our citizens are ready to make good choices. There is a lot of opportunity ahead.