The 2011 Druapal 4 Design conference in Boston left me with a lot to consider. Walking into the MIT Stata Center was a great start.

After moving from a custom platform to Open Source development years ago, I felt it wise to choose one or two content management / development platforms to focus on. I didn’t want to specialize in “everything”.  I made two choices – WordPress and Drupal.

Moving forward with Drupal was much harder. The terminology and admin navigation was not helpful in Drupal 5. The WordPress admin interface took some learning, but I never got completely lost or felt afraid I would do irrevocable damage.

I remember feeling bad for one client in particular because each time they wanted to change their Drupal website they couldn’t figure it out and had to hire me. The guy was a programmer, so he didn’t feel great about it either. Our of my commitment to Drupal one of my own sites www.WebPageAdvisor.com was built in Drupal, but eventually I reverted to WordPress so that I too wouldn’t have to pay someone to make changes on the site.

Today, nearly all of the work done at JBS Partners is on WordPress. In addition, in 2009 www.BlogWranglers.com was launched to provide site migration services.  Most move requests are to WordPress, well all of them so far are to WordPress.

In summary, I tried Drupal and WordPress. Drupal was hard. WordPress dominated incoming client requests and here we are. But, I didn’t forget about Drupal.

I volunteered at DrupalCon Boston in 2008 and this is the second Drupal4Design Boston that I have attended.

This year I learned the most at the lunch table, a presentation on user testing and the keynote by Dries Buytaert– the founder of Drupal. First, let me say it is was fascinating to be among the Drupal faithful as an “outsider”, a self-professed WordPress guy. I wasn’t quick to tell anyone that I work with WordPress and know little about Drupal.

This presentation made me feel good. It was full of affirmations that I was not the only one who had trouble with Drupal, even later versions like Drupal 6 and Drupal 7. During 75 minutes of testing every subject needed to call the help desk to complete the assigned task, which I believe was to build a page following a wire frame.

Most test subject utterly failed. Many became frustrated. Some of the issues included terminology that was unfamiliar or unclear, groups of navigation links in the admin area with no indication of what they were for or whether they were required to complete a task, drop down with 19 choices and no previewing of changes made to a page. 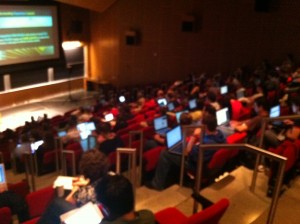 The main auditorium full of laptops and tablets

I thought this was fantastic. The Drupal people are being very open about a huge weakness and they are working very hard to make the changes to reduce frustration and make Drupal easier to use.

Who is Drupal for?

During the keynote question and answer period Jon Sachs asked Dries about the levels of Drupal users and which is being targeted in the user testing.  The three levels Jon described are the business owner / end user, the person or company that is hired to create the site and the deeply knowledgeable Drupal developers. I thought about this and piled on the different cultural and language factors to the mix. Not an easy question.

You don’t want to alienate the strong developer community. But, Drupal cannot remain difficult to use. I don’t remember that Dries provided a specific choice in his reply, but he clearly recognized and asked for help in improving the design of Drupal, the User Interface of the admin area.

The Keynote – Founder of Drupal

Dries is very humble, willing to accept his own perspective or even shortcomings and eager to welcome suggestions and contributions to make Drupal better.  He is the kind of guy you can have a conversation with, which I did. More on that later.

One of his slides clearly made the point that right now design is more important than engineering and then he added, “there, I said”. to an auditorium full of laughter. You see Dries is an engineer by training.

One of the really fascinating questions was from Jaye. He asked about WordPress, Drupal and Joomla all improving and whether Dries saw a convergence in 5+ years.  He asked what would separate the platforms.

The answer centered around Drupal being an enterprise level platform to build on.

Is there another major CMS that has a design focused Camp / Bar or Conference?

I happened to sit at a lunch table that included very experienced Drupalers and conference speakers.  I took the opportunity to be a fly on the wall.  A few topics that interested me.

Large Drupal shops – the group offered that there are many large Drupal shops, whether they be design or custom solution focused. The interesting point to me was that they held the opinion that they no of no large WordPress shops.

Why would this be?

I am not convinced that any of these answers offered at the table are fully accurate. Do you know of any WordPress shops with more than 15 or 20 people employed full time?

The inference here is that large multi-national is not likely to choose WordPress because there are not large WordPress shops to turn to for support, customization and special projects.

There is a shortage of talented Drupal developers, themers and programmers. This was confirmed multiple times before and after lunch.

I found myself drying my hands in the Men’s room with Dries. He asked me how the conference was going and we ended up having a nice conversation on the way out of the bathroom and into the concourse.

This conversation combined with the lunch conversation really left me with the thought that these folks see Drupal in the Enterprise and WordPress, well, not so much. 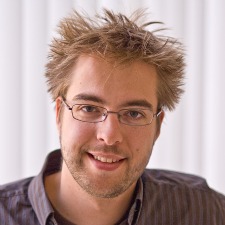 I asked Dries what the big differentiators are between WordPress, Joomla and Drupal.  He talked about editorial review and user permission, workflow and Drupal more as a platform than a solution.

We agreed that Joomla is not really worth speaking about and that many feel that way while there is WordPress and Drupal available.

We also discussed how hard Drupal has been to use and how expensive it is to hire quality talent to work on Drupal, especially when compared to the WordPress. He agreed that is the case and attributed this to simple supply and demand, which seems reasonable.

The Drupal core development group is aware that much user interface work is needed to make their platform user friendly. Hurray!!! The focus on user interface and design will have a huge benefit.

The Drupal community is cohesive and supportive. Definitely a male dominated, programmer-centric group at the conference. There were ladies in the crowd of 300, of course.  Quality folks, I must say as my misplaced iPhone was returned to the registration desk where I retrieved it within 10 minutes of discovering it was missing.

Need a job? Become a Drupal themer or developer

No Convergence: WordPress and Drupal will continue to grow and improve.  Drupal will become prettier and easier to use (more like WordPress in that regard) and WordPress will become more of an extensible development platform and handle more complex requirements (more like Drupal).  I have to agree with Dries, there is room in the world for both. Complete convergence that wipes out the need for one or the other is not going to happen.

Will I start looking to take on more Drupal clients? Sure, why not. Especially after Drupal 8 has been out for six months.

Do you think Drupal needs usability testing and a focus on better admin area design?

Do you think WordPress is present in the Enterprise?

Are there any large WordPress shops out there?